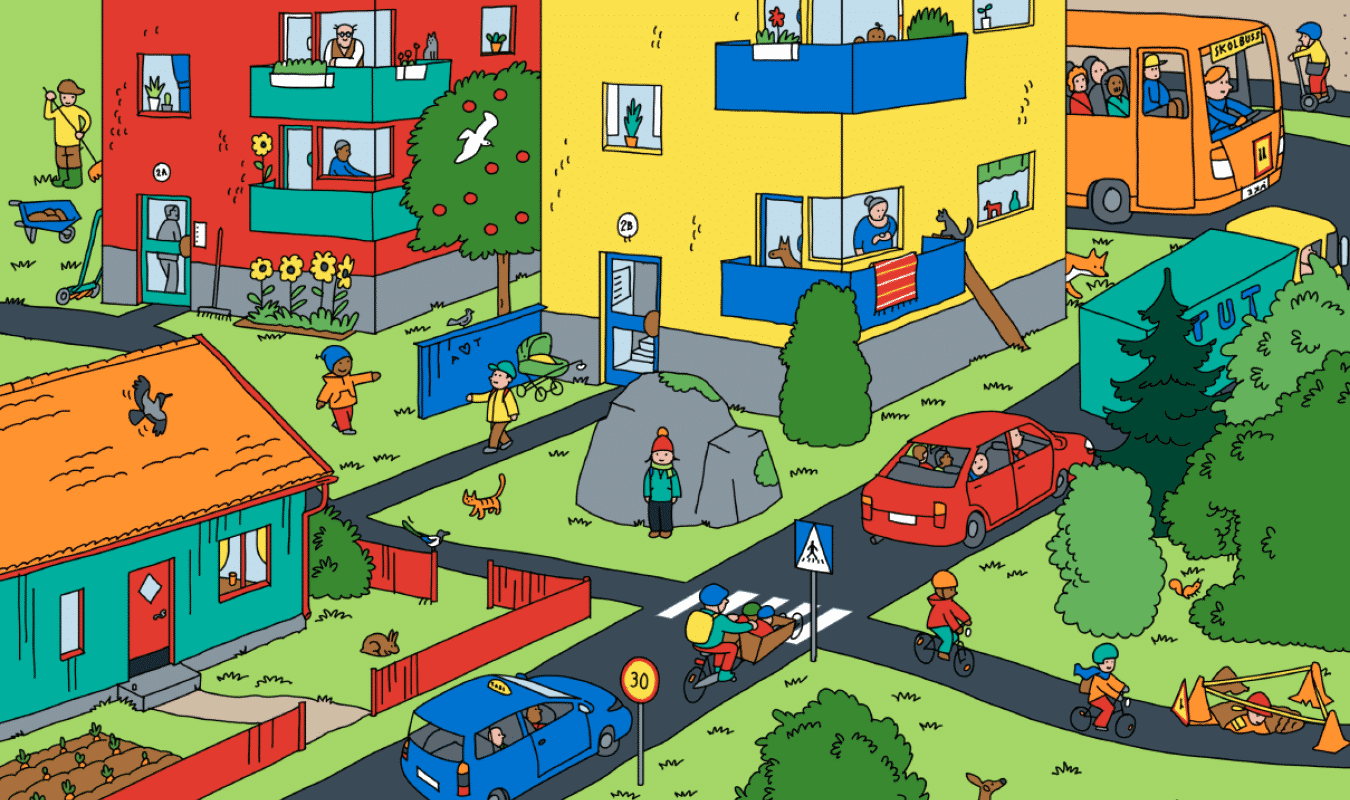 It is a September morning and Tuva is standing as usual by the Big Rock
next to the pedestrian and cycle path, waiting for Salim and Joppe. There
is a chill in the air and the summer holidays already feel like a distant
memory. A cute squirrel scurries across the road and just manages to
avoid being run over by a car. Tuva could see that it was Nina’s father
driving. He is always in a rush when taking Nina to school. He probably
didn’t even see the squirrel, Tuva thinks. At that moment, Salim and Joppe
arrive. They exchange greetings and look forward to going to school
together. At the same time, the twins, Wilma and William cycle past,
happily ringing their bells.

The friends always walk the same route to school. They know the way to
school and they feel safe. Once they were asked by their teacher, Petter, to
draw a map of the route they take to school and describe any places
where they did not feel safe. The children thought that the cars usually
drive too fast past Tuva’s house. They described the problem with the help
of drawings and sent them to the traffic planner at their local commune.
That led to a lowering of the speed limit, and now the cars are driving past
Tuva’s house much more slowly – at least most of them!

When they arrive at the Crofter’s Hedge – it is called that because long
ago, there used to be a croft there – Tuva spots the squirrel again. “That
cute squirrel was almost hit by Nina’s dad”, she tells them. Suddenly, the
squirrel disappears through a hole in the hedge that the friends have never
seen before. “Come on, let’s see where it went”, says Salim. “Don’t forget
that school will be starting soon”, warns Joppe. They crawl in and see that
there is a fairly large tunnel in the hedge, and further on it opens up into a
room. “This could be the place for our secret club!”, ventures Tuva. “We’ll
call ourselves the Squirrel Club” after the squirrel we followed”, Joppe
suggests, and Tuva and Salim agree that it is an excellent name. It is quite
dark and a little thrilling. They keep crawling and soon, they spot the exit.
But how peculiar, have the street lights been lit again?