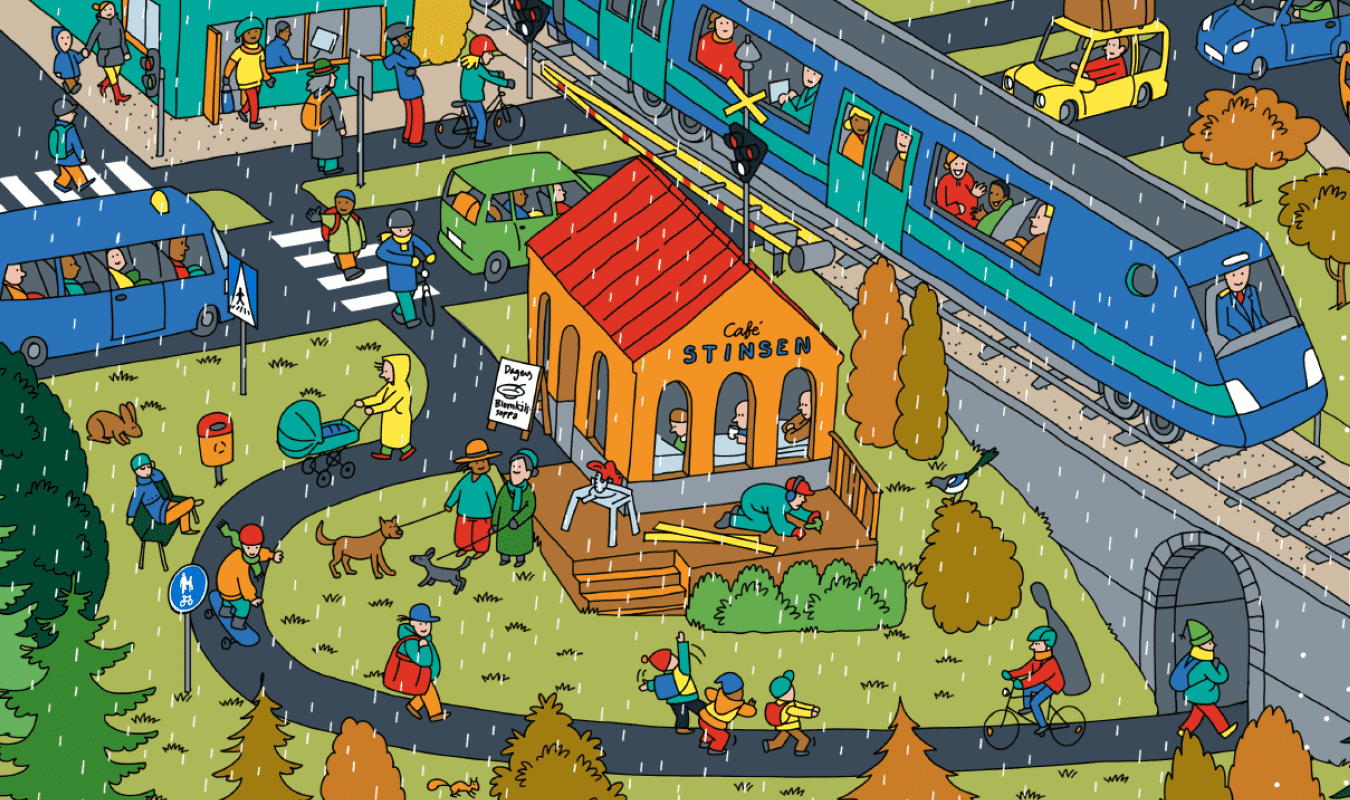 A cold, wet gust of wind hits the children and suddenly it is raining heavily.
They look down at the pavement and then at one another in surprise. On
the other side of the road the weather was as it was autumn, but dry. On
this side, the road is wet, as if it has been raining for days! “This school day
is just getting weirder and weirder”, Tuva points out and the others nod.
But now they have to pick up the pace. They do not want to arrive at
school soaking wet. This is where the railway runs through the town, and
soon the morning train will pass at 07:35 with all the commuters going to
work in the city. There are two ways to cross the railway to get to school.
The shortest route is straight ahead at the railway crossing. This is the
quickest route – unless the light turns red, the signal sounds and the
barriers are lowered.

Then you have to wait for the train to pass, after which the barriers are
raised and the light starts flashing white again. Joppe tells them that once,
a guy sneaked under the barriers. A train came thundering past just as the
guy made it across. Everybody knows that trains cannot just slam on their
brakes. The braking distance can be over a kilometre! Sometimes,
grown-ups do such stupid things that you would rather not watch.

For that reason, it is obvious to the friends that they should always take the
slightly longer route where they can cross in safety through an underpass
beneath the railway. “Do you know how high the voltage is in those power
lines?”, asks Salim as they walk along the pedestrian and cycle path.
“15,000 volts”, he then says in answer to his own question. “My aunt told
me that, she drives freight trains in the north. It is not only because of the
trains that it is unwise to play by the railway. You could be electrocuted,
and you don’t even have to touch the lines!”. “Oh wow, that’s scary”, says
Tuva. “It’s no fun playing there anyway”, says Joppe. Just before they
reach the underpass, the commuter train passes and the children stop.

They always do, because Joppe’s and Salim’s dads usually take that train,
and today they are lucky! They catch sight of one another through the
window. Their dads wave and blow kisses, and the children jump about
and do a silly dance. Then they hurry through the underpass. They are not
too wet, but it feels good to get out of the rain for a little while. But what is
that white thing they spy at the end of the underpass?