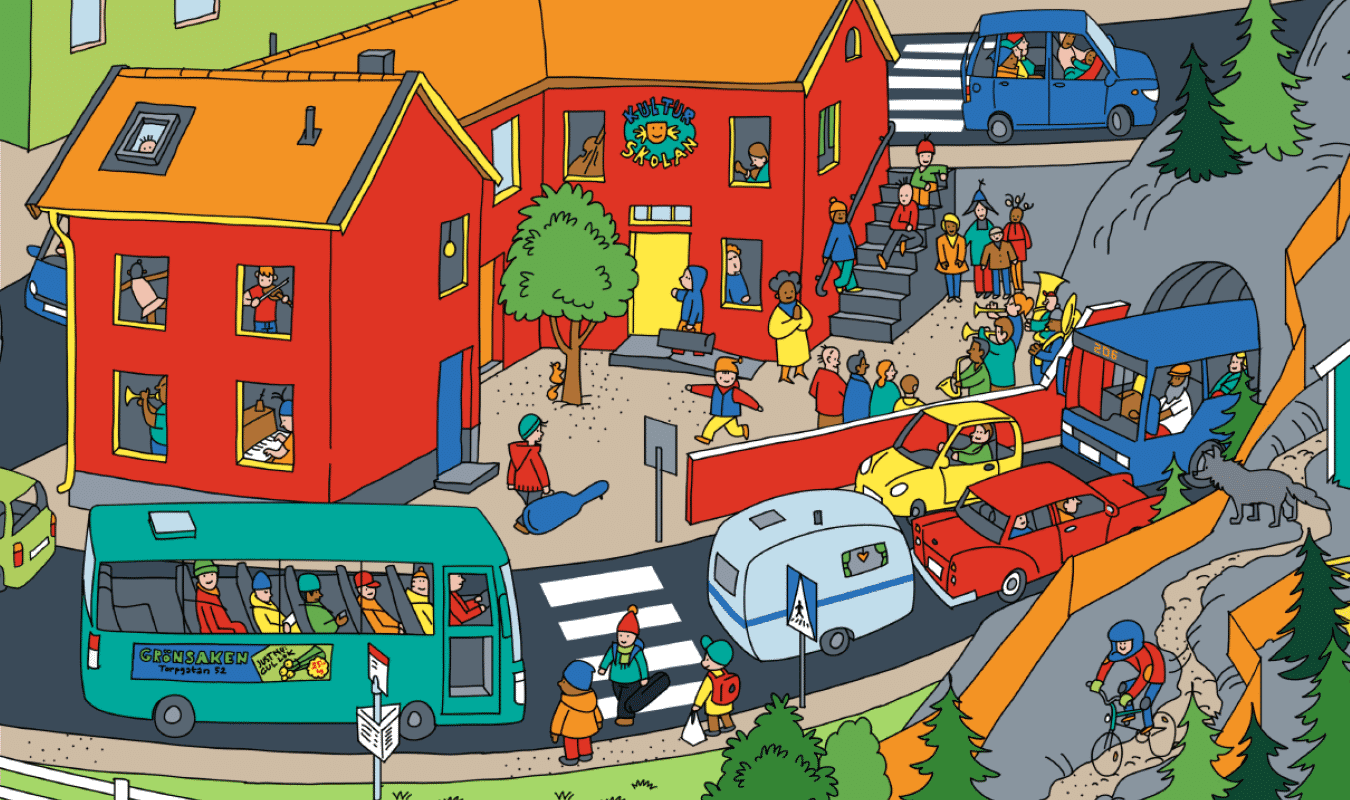 When they walk across the car park they see the bus at the bus stop. But
they agree to wait for the next one – instead of running. “There is no need
to rush. We can take it easy. Then we might forget to look both ways at the
zebra crossing” Tuva remarks. While they wait at the bus stop they hear a
blackbird singing on a chimney top. They all breathe in deeply, enjoying
the fresh air. “It really feels like spring now”, says Salim.

“Taking the bus today is perfect, because then we don’t have to walk over
the hill and it stops really close to Joppe’s grandpa’s house” says Salim
when they have boarded and showed their bus passes. “Going by bus is
the best and it is cheap too” says Joppe. “Some people say that a bus
pass is expensive, but how many people really think about how expensive
it is to drive?” “It should be super expensive”, says Tuva. “First you have to
buy the car itself, and then pay road tax, insurance, service…”. “And fuel!”
Salim adds. “Also, it is much more eco-friendly to travel together with other
people instead of sitting alone in a car in a huge tailback”, says Joppe.

The bus enters the tunnel and a cosy darkness descends. The children try
to come up with other forms of public transport. “Your dads travel by
train!” says Tuva. “Dad prefers the train, because then he has time to work
while he is on the train”, says Joppe. “And my dad usually reads detective
novels”, says Salim. I have a cousin in Stockholm who takes the boat to
work every day”, says Joppe. “Our neighbour has moved to Gothenburg,
where lots of people take the tram”, says Salim. “People who take the car
get lazy”, Tuva states. “It becomes a habit not making even the slightest
bit of effort.

When you use public transport, you have to walk to the bus stop, and
taking some exercise every day is good for you!”. “But if it’s a very long
way to any public transport, what do you do then?” Joppe asks. “You can
car pool”, Salim suggests. “That is almost like public transport.” When the
bus exits the tunnel it is almost time to disembark. Then they notice that it
is brighter outside than when they boarded the bus a little while ago.