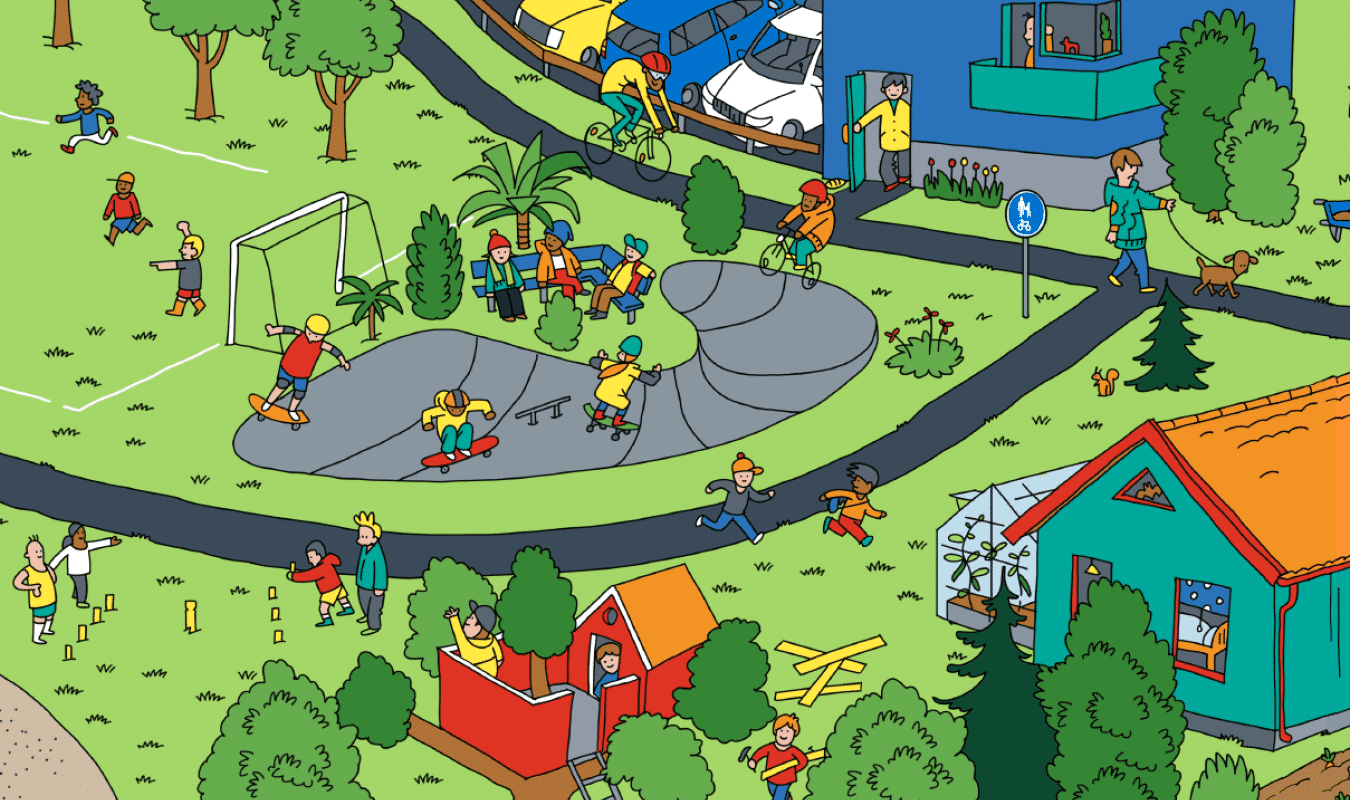 It is not the summer holidays, but it feels like summer. The trees by the
playground have leaves and the sun is shining. There are bikes lying all
around the football pitch, as well as a pile of rucksacks and shoes. Some
of their classmates have come home from school. Now, they are playing
football in their bare feet. Tuva, Salim and Joppe park their new bikes and
take off their shoes and coats before joining the match.

The best thing about the park between Joppe’s grandpa’s house and their
own homes is that no cars are allowed. You can play hide and seek, play
ball and run around freely without having to worry about the traffic.
At the edge of the pitch is a forest where the children have built tree
houses and a cross-country track for bikes. Tuva, Salim and Joppe start to
feel tired long before their friends. So many strange things have happened
today. They take their clothes and bikes and sit down to rest by the
skateboard park where two children are playing by themselves. “I am so
glad that The local commune plants so many trees and plants here”, says
Tuva.

A few years ago the local commune contacted the families in the area.
They wanted suggestions for how they could improve the local
environment. Many children wanted a skateboard park, and they got one.
But it would probably not be as nice if Tuva hadn’t suggested that it should
look like a jungle garden.

After the children have rested and are on their way home they hear a
bicycle bell ringing. It is Petter, their teacher, on his way home from work
on his racing bike, wearing training clothes and sports glasses. “I talked to
the headmistress Pernilla about your suggestion”, he tells them as he
slows down to walking pace. “We both like the idea, and we’ll have a
meeting next month.” Then he cycles off.

When the children approach their houses they see Salim’s and Joppe’s
dads as well as Tuva’s mother talking to one another. “We’ve got extra
bikes from Joppe’s grandpa!” Salim exclaims. “That’s great, then you can
spend the whole summer holidays cycling in the forest” says Salim’s dad.
“Did you have a good day in school?”. “Yes, the best one we have had in a
long time”, the children respond. “And the longest! But tomorrow, I don’t
think we will crawl through that hole in the hedge again”, says Tuva and
smiles shrewdly to her friends in the Squirrel Club.