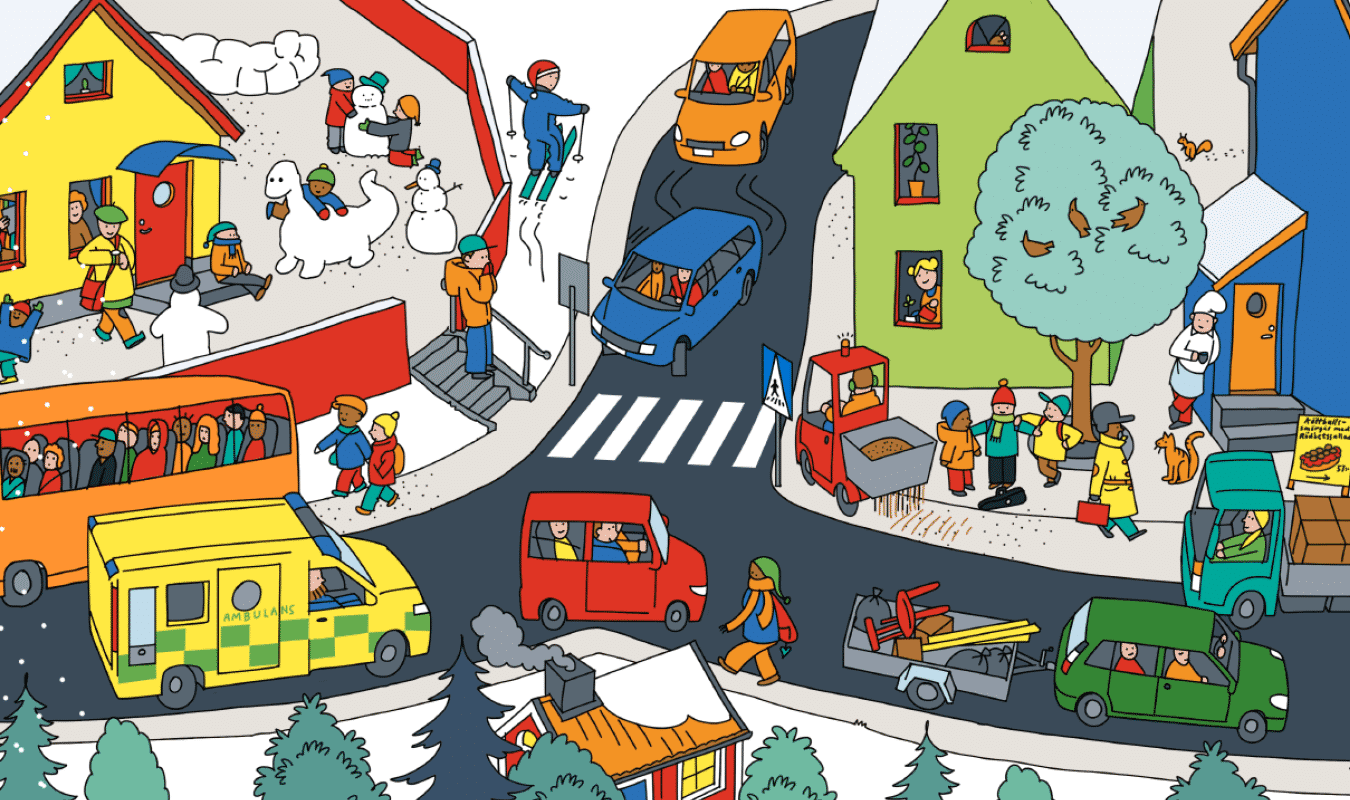 Outside, the schoolyard has turned into a museum full of snowmen. “When
did this happen?”, Tuva wonders, but quickly realises that nothing should
surprise them anymore.

Salim, who is the last to leave, slips on a patch of ice and falls over, but is
quickly back on his feet. “Will you walk with me to music class as usual?”
Tuva asks. “Of course”, says Joppe, “but we have to go by the café
because I promised to pick up some pastries for grandpa, he’s having
visitors over”. Outside the schoolyard, they have to go down a small set of
steps and then cross the road. “Watch out so you don’t slip and break the
violin”, says Salim, whose knee feels a little tender.

Right at that moment, a car approaches from up the hill. The driver does
not seem to have taken into account the slippery conditions and is driving
as if the conditions were normal. Suddenly, he hits an icy patch and starts
skidding towards the zebra crossing. Fortunately, he manages to stop.
Nobody was crossing but the driver still seems fairly shaken. “I guess he
won’t drive as fast as that, next time the roads are slippery”, says Joppe.

Joppe’s uncle runs the Corner Café. In the summer, there is usually an
outdoor area on the street corner below the chestnut tree, but now, of
course, it is winter and the furniture is packed away. This gives Joppe an
idea. There were lots of snowmen in the schoolyard. What if they asked
Joppe’s uncle if they could build a large snowman at the corner by the
café. We could make it look like somebody driving a car, with a sign in
front of it telling people to slow down when it is slippery. Something to
think about for everybody who passes the Corner Café.

They enter the café by the bakers’ entrance. They walk past the office and
say hello to Joppe’s uncle, who looks tired. He was up early to help the
bakers. “Now, everybody wants Shrove buns”, he sighs and the children
look at one another in surprise. “And I who was craving saffron swirls and
ginger snaps”, says Salim. Joppe’s uncle laughs sleepily and says that
they can help themselves to anything in the café. “I guess it will be four
Shrove buns then”, says Joppe to the man at the cash register. They do
not have to pay for them, and are also allowed one biscuit each from a
biscuit tin.

“You forgot to tell your uncle about the idea of building a snow sculpture”
Tuva tells Joppe as they are leaving. “I’ll do it next time”, says Joppe. But
outside it feels as if snowman season is coming to an end.