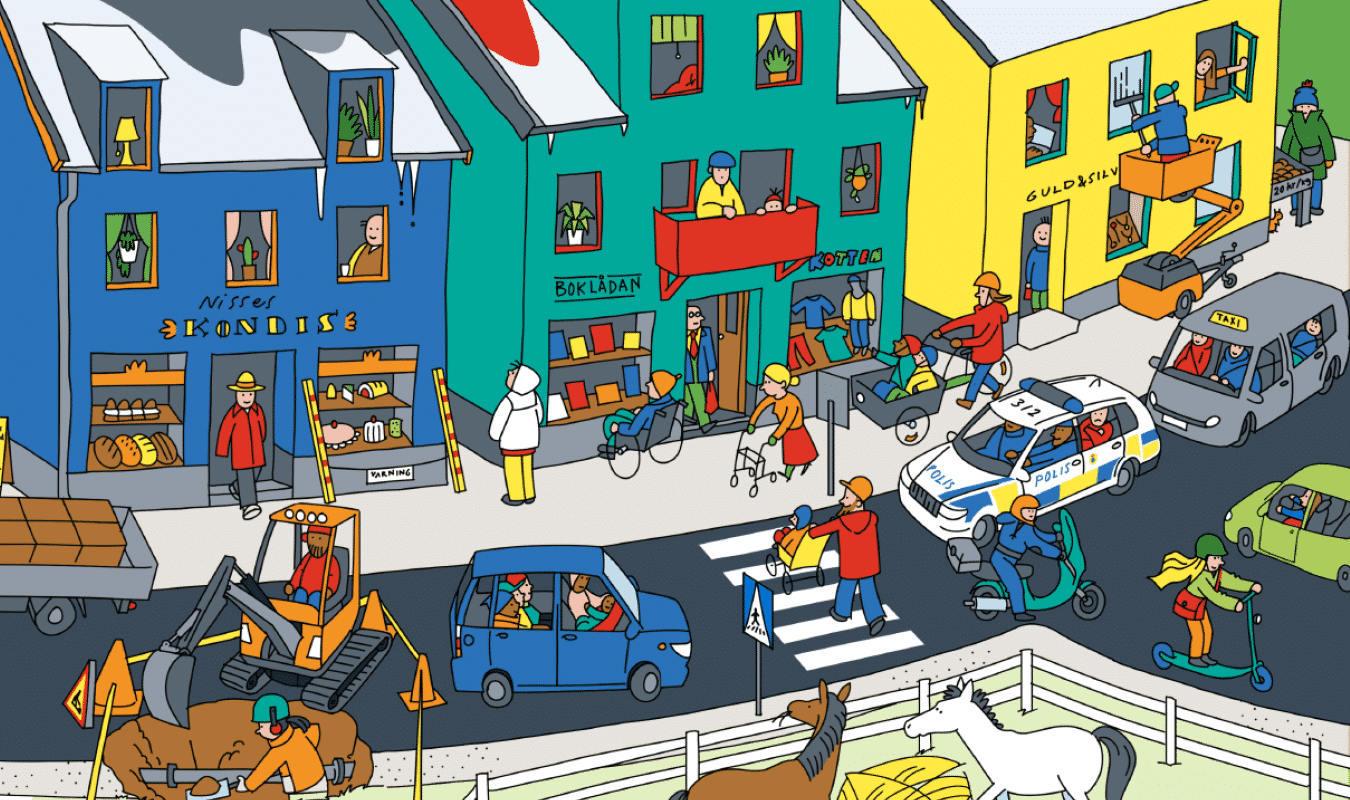 Outside the door, Tuva feels a drop of ice cold, melting snow hit her neck,
and the pavement is cordoned off with a sign warning everyone to watch
out for icicles. Apparently, munching biscuits took longer than they
thought, and now they will have to hurry if Tuva is going to make it to her
violin class. A car approaches. It stops in good time and waits until the
children cross at the zebra crossing. “Not all grown-ups are in a hurry all
the time”, says Salim. “Some drivers are kind and show consideration for
us children”. “But don’t you know that cars MUST stop for EVERYONE
who intends to cross a zebra crossing”, says Tuva.

As they are walking on the other side of the road, the car slowly
approaches alongside the pavement. That is when the children realise that
the driver is Salim’s mother. She has just picked up Salim’s younger
brother Noor from pre-school. She stops and gives the three friends a lift
so they don’t have to run to Tuva’s violin class.

Tuva and Joppe, who are the shortest, sit on booster seats. “What a lovely
smell, have you been to the Corner Café?” Salim’s mother asks. “Yes, we
got pastries for my grandpa”, says Joppe. “Shrove buns”, he says
speaking especially clearly, as if he was testing the waters. “Well, they are
perfect at this time of year, right after New Year”, says Salim’s mother.

“Salim just said that some grown-ups are kind and show consideration for
us children!”, says Tuva when they are strapped in. “And he meant you!”.
“So, I’m not just an annoying, nagging grown-up who bosses you around!”
Salim’s mother laughs while Salim looks embarrassed. Salim’s younger
brother is two and sits strapped into a child safety seat, facing the rear, in
the front passenger seat. “I also sat in a child safety seat like that when I
was little”, says Joppe. “But I was facing the front”.

“For infants we use an infant car seat”, Salim’s mother explains. “When
they are a bit older, they sit in a child safety seat facing the rear, like the
one Noor has. It’s only when they are a certain height and weight that they
can use a forward-facing car seat.” “And now I’m so tall that I don’t even
use a booster seat”, says Salim. They arrive at the parking space above
the Culture School. The three friends say thank you for the lift and jump out
into the slush.

“You can take the bus home later”, says Salim’s mother. “You have your
bus cards, right?”. They arrive just in time for Tuva’s class. There is a cosy
waiting room at the Culture School, with a ping pong table, sofas and a
piano. That is why Salim and Joppe enjoy going there with Tuva. When the
class is over, they walk towards the bus but something feels different. A
great tit is singing “ti-tu ti-tu” and the snow has all but disappeared.