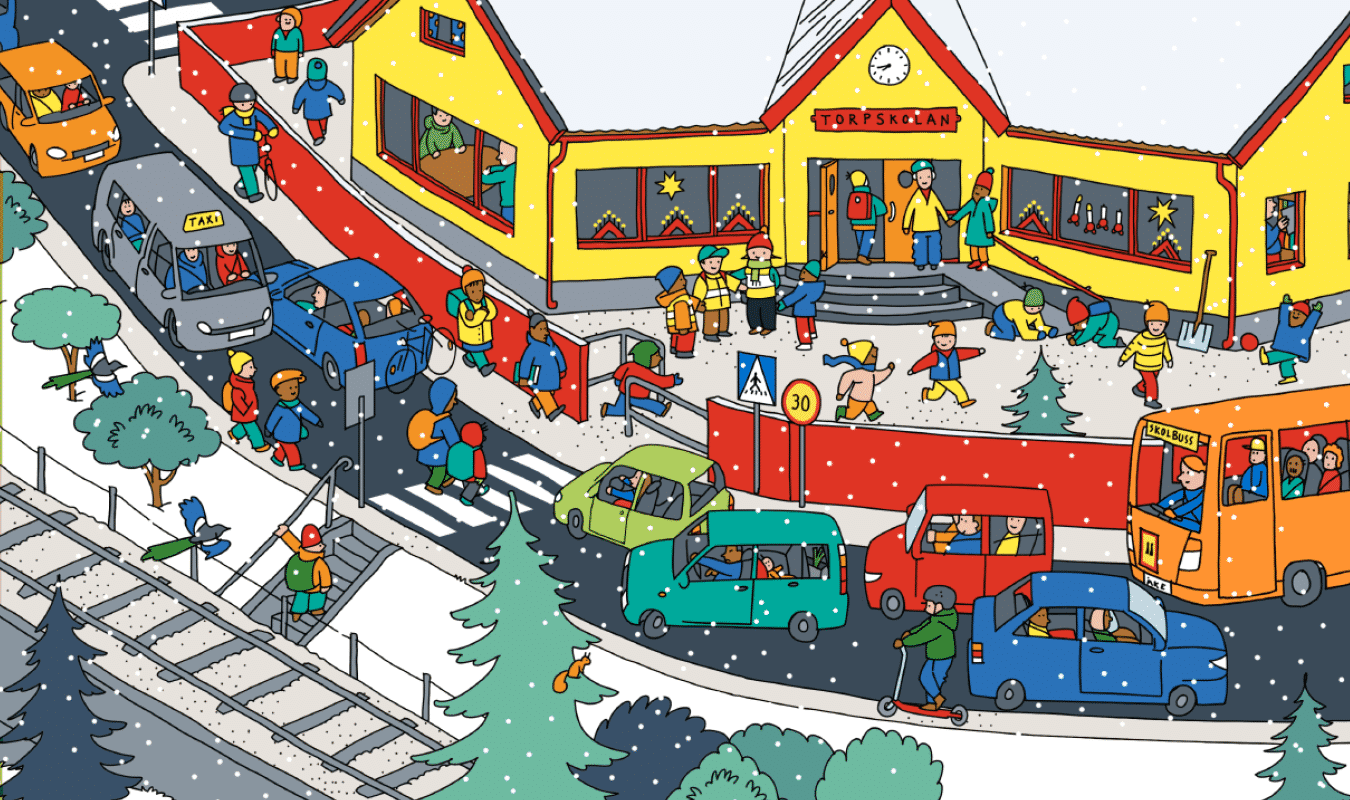 “I have a feeling that there was something odd about that squirrel…” says
Joppe. “It made us crawl through the Crofter’s Hedge and since then, this
school day has been unlike any other”. The three friends approach the exit
to the underpass.

They smell winter in the air, and indeed winter has arrived at the other end.
The ground is covered in snow and snowflakes swirl around in the freezing
air! “If this wasn’t so weird I would just love it!” says Tuva. “I love it no
matter how weird it is”, says Salim. “Luckily, we’re not too far from
school”, says Joppe. “Otherwise, our wet coats would turn into frozen
suits of armour!”. When they arrive at school, everything is normal, aside
from the fact that it is not the season the children had expected.

As usual, there is complete chaos at the drop-off area! Tuva’s, Salim’s and
Joppe’s schoolyard is great, with trees to climb and a playing field and lots
of things to do at break time. It is simply the best schoolyard in the world,
except for one fairly important detail: the drop-off area! Or rather, that there
is no drop-off area. That is the reason there are cars everywhere outside
the school and it can be dangerous.

While the children walk up the steps from the underpass, they try to think
of a possible solution. “Either the area around the school has to be
redesigned, or the pupils will have to start walking and cycling to school
instead”, Salim suggests. “More people should do what we do and go by
foot!” says Joppe. “That is certainly true”, says Tuva. “But there are some
pupils who need to go by car, and there will always be pupils who have to
take the school bus.” They conclude that they will bring the matter up with
their teacher, once and for all!

When they enter the schoolyard, half the class come running towards
them. Everybody is elated about the snow, but nobody seems to think that
anything particularly strange has happened, except one thing. “Why are
your clothes so wet?”, Jasmine asks. But at that moment Joppe pulls at
Salim’s and Tuva’s sleeves and points to the classroom window.

An Advent star lantern is hanging there and the windows are full of Advent
candlesticks made of paper with the first candles lit. The three friends look
at one another in astonishment, but do not say anything to anybody. They
sneak inside a little before the bell rings. Once they have hung their clothes
up to dry, they walk together to the classroom where their teacher, Petter,
is sitting at his desk. “Welcome!” says Petter. “We have a suggestion.”
says Tuva. “We have to get a safe drop-off area at our school”, says
Joppe. “Ok…” says Petter “and how would you go about doing that?”.
“That is precisely what we are going to find out!” says Salim.

“We suggest that the school invites the parents to a parents meeting,
together with the headmaster and the local communes traffic planner, you
know, the lady who helped us map out our route to school!” says Tuva.

“…That sounds very clever” Petter remarks. “I promise, I’ll speak to the
headmaster.”When school ends, the children congregate by the coat
racks. “I’m glad our clothes have dried” says Salim. “Are you coming with
me to the music room?” asks Tuva. “I have to pick up my violin, because I
have a class at the Culture School”. They pick up their shoes, get the violin
and leave the school by the teachers’ exit. The teachers’ little calendar is
hanging by the door. Just as Tuva opens the door, Salim sees it and reads:
January 13, we celebrate the name Knut…