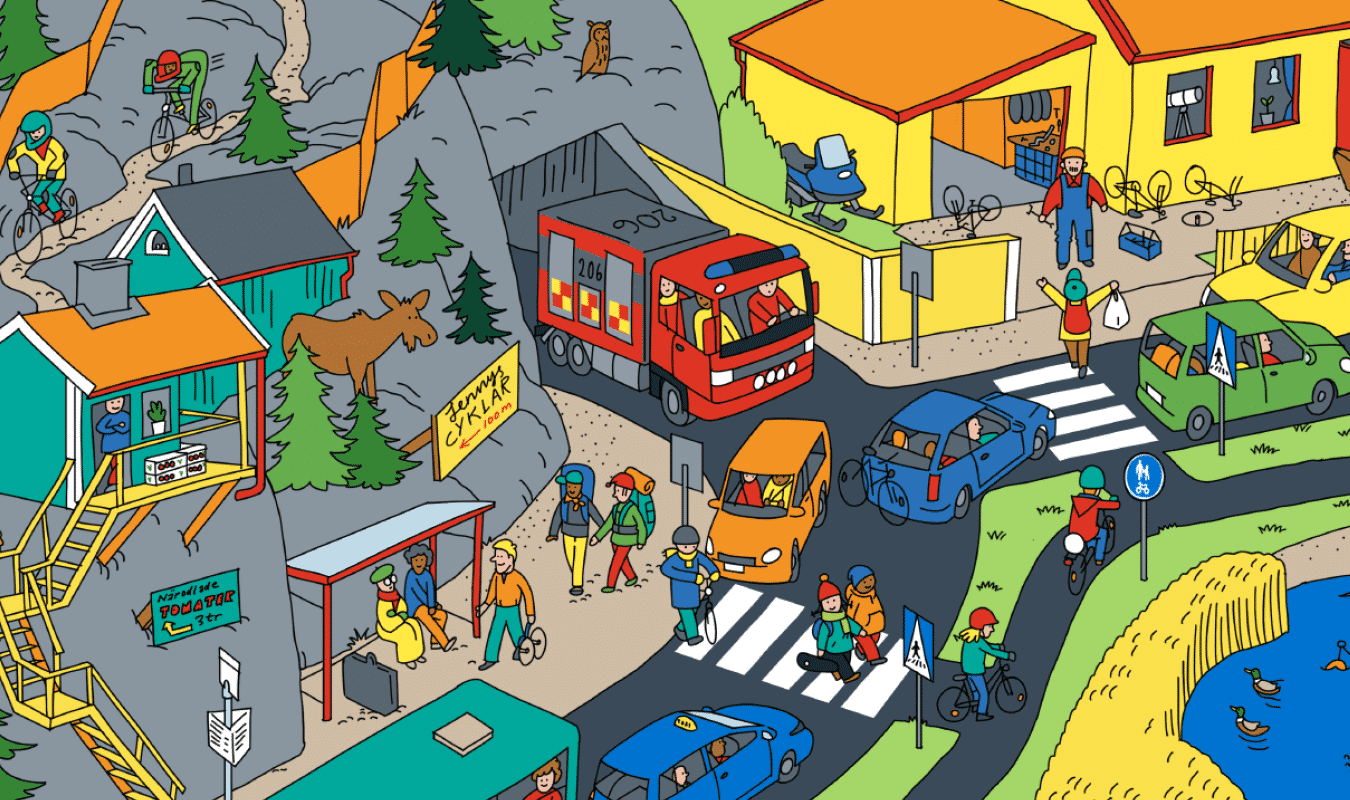 Joppe presses the button and the bus slows down and stops. In the park,
the grass has turned into a lush Green colour. They disembark and start
walking along the pavement and cycle path towards Joppe’s grandpa’s
house. Purple, white and yellow crocuses are blossoming everywhere. In
some places, fieldfares jump about trying to catch worms. It feels as it is to
warm for coats and hats. From a distance they see Joppe’s grandpa doing
something on his driveway. As they approach, they see lots of tools and
three bikes. Joppe almost bounds ahead of the others. “I hope he doesn’t
forget that he has Shrove buns in that bag!” says Tuva to Salim.

“Hi grandpa, what are you up to today?” Joppe asks. “I had some parts for
different bikes, so now I’m putting together three of them. I thought, that
now that spring is here, it is about time I put together a bike for each of
you. You guys are always together, isn’t that so?”. “Thanks grandpa, that’s
kind of you”, says Joppe “but we have bikes already”. “I know”, says
grandpa, ”but what if one of your bikes breaks, what will you do then?”.

“Then we will hand it in to Joppe’s grandpa’s workshop”, Salim laughs.
“That’s right!” says grandpa. “And what will you ride while your bike is
being fixed?”. “Ahh…” all three say in unison. “Well, can we help you put
them together then?”, Joppe suggests. “Absolutely!” says grandpa.

Joppe’s grandpa’s garage is full of stuff. Mostly bicycle parts of course,
because Joppe’s grandpa loves bikes! It looks messy, but the shelves
contain bicycle parts organised in different boxes. Hand brakes, gearshift
guides, ball bearings, reflexes, etc… all kinds of things! But what should a
bike really have in order to be properly equipped? Salim checks his phone.

“I think you can download information about how to properly equip your
bike (cykelbesiktningsprotokoll) from Trafikkalendern.se… Here: Must be
equipped by law… must be equipped when cycling in the dark… Good
things to have.” They follow the template and help grandpa mount the final
parts onto the bikes. “You know, we brought Shrove buns for you”, says
Joppe. “Are they still selling Shrove buns at the Corner Café?” Grandpa
says in surprise. Since the children helped out, grandpa suggests that they
go inside and have some cordial and Shrove buns.

“Weren’t you going to keep the buns for your visitors?” Joppe asks. “But I
have visitors now, you!” says grandpa. Afterwards Joppe asks if they can
bring the bikes home with them, and grandpa says they can. “But you
mustn’t ride them!” grandpa urges. “That’s right!” says Tuva. “Because we
don’t have any bicycle helmets!” “Thanks grandpa!” says Joppe and puts
his hand on the door handle. ”What season do you think it is now?” he
asks with a wry smile. “Soon it’ll be the summer holidays!” Salim jokes.
Grandpa just shakes his head.